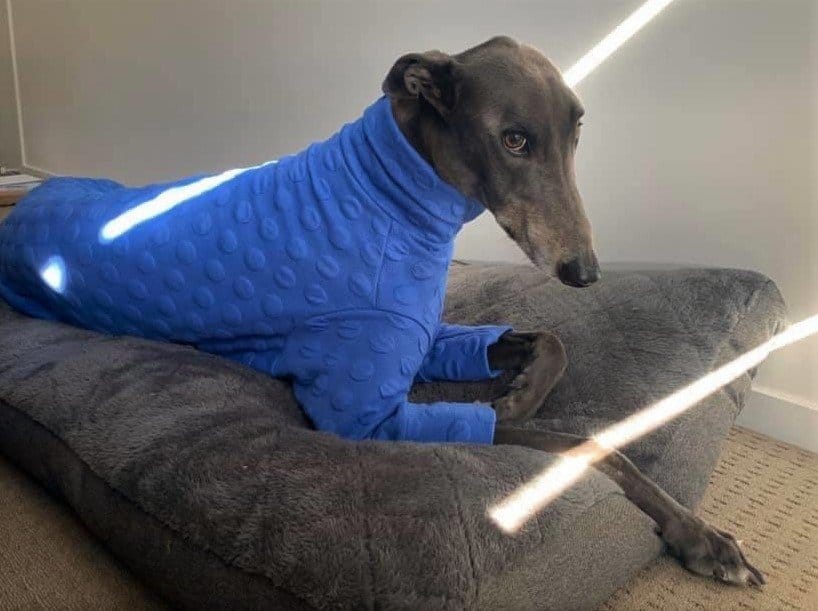 You probably know greyhounds are the fastest dogs in the world (up to 45 mph).

With their muscular Kardashian-Esque bottoms, greyhounds find it uncomfortable to sit, unlike other dogs. Racing makes their back-end muscles tight; and physically hard for them.

﻿They usually go from standing, to awkwardly lowering their buns to the floor and thud sideways like a tree falling. Once retired, these muscles may soften making sitting easier.

This surprised me probably most when I was researching greyhounds before I adopted Tigga. I watched a time-lapse video on YouTube where a greyhound owner had filmed his grey when he went to work. For eight-hours, the dog did not move off his dog bed. Not once.

﻿One of their favourite pastimes is sleeping, sometimes up to 18 hours a day. They even have the nickname ‘the 40mph couch potato’ because of this trait

Greyhounds show affection in many ways, and one of them is leaning. Not all greys do it, our Tigga is one of them, but Lottie loves a lean. If you stop to talk to someone, they lean. If you are trying to hang the washing out, they lean.

It’s quite an experience to have a 30+ kg greyhound rests its full weight on you. Greyhound show affection with the whole body and love to be near their owners. You make them feel safe and comforted, so they like to get up close and personal as often as possible. Think of it as a big warm hug from them.

Another fun fact is roaching. Roaching is the name given to when greyhounds lie on their backs with all four legs in the air. Their heads usually dangle to one side with their tongues lolling out. It is supposed to be named after the cockroach.

If you see a grey doing this, you can presume, he is super content, as they are exposing their vulnerability. They can sleep like this for hours.

So, to number five in our ten fun facts about greyhounds.

Greys have truly little body fat and only one layer of fur, making them extremely sensitive to temperature changes.

The usual rule is if you need to put on a jumper, so do they. And how they love it. When I dressed Lottie in her pink cable jumper for the first time, she trotted around like a show pony. Greys look so sweet in bandannas, pyjamas, snoods and coats.

Contrary to widely held belief they need no more exercise than the average dog. People think because they are racing dogs, they probably need to run around a lot. They are built for speed, not endurance.

Greyhounds only need two 20-30-minute walks a day, if that. They are quite content to sleep, doze, lounge, eat, snuggle & roach for the rest of the time.

What’s a zoomie? It’s an explosion of limbs that will see your greyhound careering around your garden/house/apartment from end to end like a mad thing.

A zoomie usually lasts between 30 seconds to two minutes, the grey will then retire breathless and panting to sleep for another few hours. They are great fun to watch but will tear up your lawn like crap, but you won’t care.

Greyhounds are huge-hearted big softies. Fact. Coming from the racing industry, they have never had the life of a regular dog. They are a commodity and not really looked on as a pet. They have been handled sure but never had the level of affection, fun and love a normal pet has. But boy, do they make up for it in spades!

One of greys other nicknames is Velcro dogs. Going to the toilet? They’ll follow and wait for you. They stick to their owners like glue and like nothing better than being a nose away from them. Greys adore snuggling up on the bed at night with their humans.

This really shocked me when I heard it. Just the sheer size of some greys, makes you think they need a lot of space, but they are recommended as apartment dogs. Greyhounds are very space efficient. They can curl those long legs up surprisingly well and become quite compact.

As they only need a couple of walks a day, along with some interaction and mental stimulation, they are becoming incredibly popular inner-city apartment dogs.

And the final fact in our 10 fun facts about greyhounds?

I’ll be honest, my dream dog was always a Labrador. A chocolate lab in fact. Until I read an article one day about rescue greyhounds and was amazed by their calm loving personalities. With their goofy ways and noodle limbs, they will have you in stitches.

It’s that moment when they’ve settled in for a few weeks, and you catch them gazing lovingly at you. The first lean when they feel confident. Their constant play-bowing and zooming. Finding the TV remote, your phone, 2 toilet rolls and four cushions where they hoarded them. Most of all those magical greyhound eyes that let you know they love you. When a greyhound trusts you and opens its heart to you, you’ll forge an incredibly special bond.

So, there we have it. 10 fun facts about greyhounds. We hope you enjoyed them. If you have any further quirks and stories, comment below, and we’ll see how many we can gather.

This site uses Akismet to reduce spam. Learn how your comment data is processed.